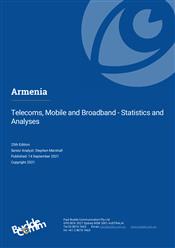 Armenia had to battle through 2020 on two fronts: the Covid-19 pandemic that effectively shut down the economy, and a brief but brutal war with neighbouring Azerbaijan over the disputed territory of Nagorno-Karabakh. The country has struggled to build economic momentum and independence since breaking away from the Soviet Union in 1991, and these two events have only served to further delay Armenia’s prospects for economic recovery in the short to medium term.

Despite the woes besetting the country on the larger scale, Armenia’s telecom sector was still able to post modest gains — at least in the mobile and broadband segments. Its fixed-line penetration continues to slide downwards, only buttressed by the rollout of fibre networks which have encouraged the take up of bundled services. Even so, the fixed broadband market remains undeveloped, being somewhat hamstrung by the lack of underlying infrastructure outside the main cities.

In general, Armenia’s small population and low GDP per capita means that the country presents limited opportunities for growth. The one bright spot for the sector is mobile broadband, which is expected reach 130% penetration rate by 2026, at a CAGR of more than 8.6%. However, this is subject to the country managing to avoid conflict.