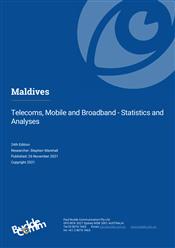 Revenue from the telecom sector in the Maldives is limited by the relatively small local population, though it is supported by a considerable influx of tourists. The vibrant tourist sector helps to account for the unusually high mobile penetration rate, though multiple SIM card use is also widely adopted. In, addition a large number of expatriate workers require SIM cards on a semi-temporary basis. Steady growth in recent years has attracted international investment, including the Qatar-based Ooredoo Group.

The two licensed operators, Dhivehi Raajjeyge Gulhun (Dhiraagu) and Ooredoo Maldives, have both invested in HSPA and LTE infrastructure, providing national coverage with both technologies following substantial investment. This development has encouraged the take-up of mobile broadband services among subscribers. In late 2018 Dhiraagu trialled 5G technology, though commercial services have not yet been considered given the existing capabilities of LTE.

Both Dhiraagu and Ooredoo Maldives also provide fixed-line services and have greatly expanded the reach of their respective fibre networks.

The country has given priority to telecom infrastructure upgrades, with considerable success. There is a well-developed national network, and in recent years investment has been extended to outlying islands, following a period when commercial considerations focussed such investment in the capital Malé as well as in tourist resorts.