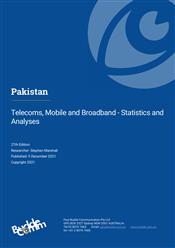 Pakistan’s telecom market has had to transition from a regulated state-owned monopoly to a deregulated competitive structure. The transition, and the development of the telecom sector generally, has been greatly aided by foreign investment.

Despite the government’s promotion of internet services and the expansion of access nationally over the past decade, fixed broadband penetration remains very low. The fixed-line telephony market, dominated by Pakistan Telecommunications, is similarly underdeveloped, and the number of fixed lines is slowly declining as the mobile segment continues to expand. Many areas of the country, particularly in the northern regions, have very limited telecom services though the Universal Service Fund Company continues to address this with various projects, mainly geared at extending mobile broadband.

As in many countries in Asia, both businesses and government agencies in Pakistan are opening up to the benefits of third-party data centres for public, private and hybrid cloud deployments. Data centres have been established in Karachi, Lahore, and Islamabad, while telcos managing data centres include Telenor, Zong, and Ufone.

The mobile market has experienced moderate growth over the last six years, supported by a young population and a rising popularity of mobile services. Slow to moderate growth is predicted over the next five years, though stronger growth will be constrained by local competition which has kept prices down and ARPU low.

Mobilink and Warid merged their operations into a single brand, Jazz, which reduced the number of mobile operators from six to five. Further market consolidation is anticipated over the next few years as the operating margins of the major operators come under further pressure.

In January 2020 Zong and Jazz completed 5G trials, having been awarded six-month licences. The capacity of LTE infrastructure and the lack of compelling user cases for 5G suggests that network operators are not yet pressed to launch commercial services.