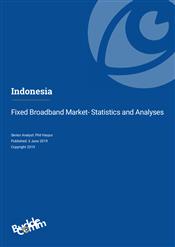 Fixed broadband penetration in Indonesia remains relatively low mainly due to a limited number of fixed lines and the dominance of the mobile platform.

4G mobile services offering mobile broadband is now relatively advanced in Indonesia and acts as direct substitute to fixed line broadband and as an inhibitor for further fixed broadband rollouts. Mobile broadband subscribers have grown rapidly over the past five years in Indonesia.

However, the fixed broadband market has grown strongly over the past five years from a very small base. In addition, a number of FTTH launches have recently occurred as Indonesia finally sees some momentum in the rollout of FTTH services.

Over the next five years to 2023 strong growth is expected to continue in the fixed broadband market driven by the FTTH market.

The digital economy in Indonesia is still relatively under-developed compared to some of its neighbours, with the percentage of online transactions at less than one percent of all retail transactions. However, developments such as smart cities, infrastructure projects such as Palapa Ring Project and the rise of FinTech firms could see the digital economy gain strong momentum.