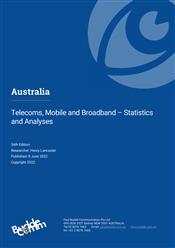 The Australian telecom market since 2020 has been considerably impacted by the pandemic, which forced many people to school and work from home and thus adopt fixed-line broadband services. Internet traffic, both fixed and mobile, increased substantially as a result.

In the fixed sector, there is an ongoing migration from copper-based platforms to fibre. This has been encouraged by NBN Co having greatly increased the number of premises migrated from hybrid fibre/copper infrastructure to FttP. This process is continuing, and by the end of 2023 NBN Co expected to deliver a 1Gb/s service across 75% of its fixed-line network. In addition, the extension of fixed wireless access will mean that up to 120,000 premises currently dependent on satellite broadband will be able to access 5G-based fixed services.

Penetration in the fixed-line market has been falling steadily over the past five years. A major reason for this is the dominance of the mobile segment and the growth of mobile broadband. The market is predicted to further decline over the next few years as both mobile and mobile broadband penetration continue to increase.

There has been some consolidation in the market through the merger of the key players VHA and TPG, as also a number of acquisitions involving fixed-line suppliers. The second-tier market continues to grow strongly although it has eased off to some degree.

Within the Australian fixed broadband market, there is a dynamic shift among customers to fibre networks. This infrastructure is being built out by NBN Co (also known as nbn), the company responsible for deploying the national broadband network, which is based on a multi-technology mix including VDSL, fibre, HFC, fixed wireless, and satellite. The DSL sector is steadily shrinking as customers are migrated to the NBN, while subscribers on HFC infrastructure will continue to be provided by existing cable within the NBN’s multi-technology mix, though also with a steady migration to full fibre connectivity.

The mobile market is dominated by the three MNOs Telstra, Optus, and TPG Telecom. These offer LTE services on a wholesale basis, thus encouraging growth in the LTE sector, while also deploying services based on 5G. Optus and (since mid-2022) Telstra provide 5G access to their MVNOs.