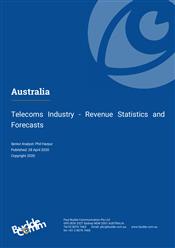 While fixed-line telephony traffic and revenue are declining, the mobile broadband market is growing steadily. Fixed-line broadband on the copper network are also declining as fibre and fixed-wireless broadband services become more widely available, through the NBN’s multi-technology architecture, with its emphasis on VDSL with Fibre-to-the Node (FttN). In time, much of the voice traffic will be data packet via technologies such as Voice over Long-term Evolution (VoLTE).

Penetration in the fixed line market in Australia has been declining at a significant and increasing rate over the past five years. A major reason for this is due to the dominance of the mobile segment and the growth of the mobile broadband segment. The market is predicted to further decline over the next five years to 2024 as both mobile and mobile broadband penetration continue to increase.

The release of spectrum for LTE mobile broadband use, as well as increased uptake by consumers and businesses, is helping to offset the decline in revenue from fixed-line services, although as user uptake increases so will the amount of bandwidth consumed.

Other sources of revenue for the major telcos include broadband, data and IP access, business services and applications, cloud computing and other telco services. New revenue streams from fibre and cloud computing in particular are assisting the telcos to compensate for their losses from revenues from traditional revenue streams.

The second-tier market continues to grow strongly although eased off to some degree during 2019. Developments in this market have been dominated by industry consolidation a process that is set to continue over coming years, despite the temporary setback after the failed Vodafone and TPG merger.

This report provides statistics on revenue and market forecasts as well as analyses for the Australian telecommunications market by major providers and service. The telecoms service market is segmented according to the major providers Telstra, Optus, Vodafone, as well as second-tier market providers including Vocus- M2, TPG and Macquarie Telecom.

Companied mentioned in this report include: