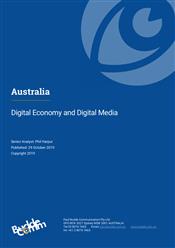 Streaming is closing in on broadcast TV. There is a rapid increase in the rate of adoption of SVOD occurring where high-quality broadband is already available. The growth in the uptake of catch up and live traditional TV streaming services had slowed down, with SVOD penetration on track to overtake it. The NBN is accelerating this trend as the mass deployment of high-quality broadband takes place and will significantly decrease the cost of delivery of SVOD.

Netflix has emerged as the SVOD dominant operator, but both Stan and Presto have built up a significant customer base, and both have the substantial financial resources of their backers at their disposal.

Also the distribution advantage held by FOXTEL is slipping away as the NBN becomes built out over a greater number of premises, so expanding the reach of capable broadband infrastructure which enables subscribers to access OTT and IPTV content. These changing market conditions are impacting both the FTA and pay TV industries.

With the move towards 5G well and truly underway it is important to look at what will be the value of IoT infrastructure to the development of a network that will be dominated by sensors and devices.

The infrastructure that is now being built offers a range of features such as ubiquitousness, affordability, low latency, high speed and high capacity. It will link millions of devices, such as sensors, that will enable us to manage our environment, traffic, infrastructures, and our society as a whole much more efficiently and effectively.

The ‘Internet of Things’ (referring more to personal devices such as wearables and smartphones) and M2M (referring to a more industrial use based on sensors) transform every single sector of society and the economy and it will be out of this environment that new businesses – and indeed new industries – will be born. 5G will take a leadership role in the development of M2M but the NBN is also a key infrastructure element as more and applications will require high quality video. These developments are closely linked to big data, data analytics, cloud computing and data centres and these elements all play a fundamental role in the success of this new infrastructure.

Companies covered in this report: