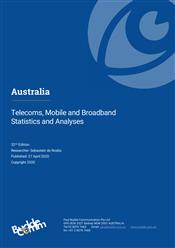 This report covers extensive statistics and forecasts for the Australian telecoms industry over a wide range of topics including:

While fixed-line telephony traffic and revenue are declining, the mobile broadband market is growing steadily. Fixed-line broadband on the copper network is also declining as fibre and fixed-wireless broadband services become more widely available, through the NBN’s multi-technology architecture, with its emphasis on VDSL with Fibre-to-the Node (FttN). In time, much of the voice traffic will be data packet via technologies such as Voice over Long-term Evolution (VoLTE).

Penetration in the fixed line market in Australia has been declining at a significant and increasing rate over the past five years. A major reason for this is due to the dominance of the mobile segment and the growth of mobile broadband segment. The market is predicted to further decline over the next five years to 2024 as both mobile and mobile broadband penetration continue to increase.

The second-tier market continues to grow strongly although it has eased off to some degree during 2019. Developments in this market have been dominated by industry consolidation a process that is set to continue over coming years, despite the temporary setback after the failed Vodafone and TPG merger.

Within the Australian fixed broadband market, there is a dynamic shift among customers to fibre networks, as this infrastructure is being built out by nbn (NBN Co), the company responsible for the national broadband deployment. Australia’s broadband sector is making improved progress in its migration to a multi-technology NBN.

Australia’s National Broadband Network (NBN) is delivered via a multi-technology mix (MTM) to homes and businesses including: fibre to the premises (FTTP), fibre to the building (FTTB), fibre to the node (FTTN), Hybrid Fibre Coaxial (HFC), fixed wireless and satellite.

The annual growth rate in the overall number of broadband subscribers is expected to continue to slow into 2020, with most growth coming from the mobile wireless and fibre broadband markets, due to increased uptake by the nbn is these two segments.

The DSL sector is expected to shrink as customers are migrated to the NBN in areas where services become available, while subscribers on HFC infrastructure will continue to be provided by existing cable within the NBN’s multi-technology mix. Commercial cable services based on the DOCSIS3.1 standard are anticipated in 2020.

The fixed-line broadband market continues to grow steadily as the nbn rollout gains momentum, although overall penetration is predicted to grow slowly over the next five years to 2024.

There is also a significant number of Mobile Virtual Network Operators (MVNO) in Australia: These companies purchase wholesale mobile services from the MNOs, provide services under their own brand and typically provide their own billing and customer care. Key MVNOs in Australia include Amaysim, Kogan Mobile, Aldi Mobile, Ovo Mobile, Boost Mobile, Lebara Mobile and Virgin Mobile.

Australia’s mobile network operators continued to work towards the launch of 5G, laying foundations for the next-generation network and continued to develop and enhance their existing 4G networks on the upgrade pathway to 5G.

By 2019 all three MNOs now provide comprehensive population coverage with their LTE networks and were well on the way to launching 5G services.

Streaming is closing in on broadcast TV. There is a rapid increase in the rate of adoption of SVOD is occurring where high-quality broadband is already available. The growth in the uptake of catch up and live traditional TV streaming services had slowed down, with SVOD penetration on track to overtake it. The NBN is accelerating this trend as the mass deployment of high-quality broadband takes place and will significantly decrease cost of delivery of SVOD.  Netflix has emerged as the SVOD dominant operator.