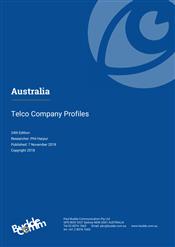 Australia’s mobile network market is set for a major shakeup

Telstra is Australia’s largest telecommunications provider offering a full range of telecom services throughout Australia. Telstra’s mobile network is well-positioned to offer superior services to those offered by the NBN company. Furthermore, through its national Wi-Fi and fibre backbone networks it can rapidly offload any heavy broadband traffic from its mobile network onto its fibre backbone.

Optus is Australia’s second-largest telecommunications carrier and second-largest mobile operator. The market position of Optus has not changed all that much over the years. It has been the number two telco in the Australian market since its inception over twenty years ago.

In Australia TPG has the largest data network and voice network after Telstra, the largest fully converged voice, video and data IP-based access network in regional Australia, and the largest voice-enabled IP network. TPG is set to become the fourth Mobile Network Operator in Australia.

Vocus is a telecommunications provider offering a range of ICT solutions for ISPs, Telcos and enterprises across Australia and New Zealand including broadband, fibre, data centre services, and Unified Communications. Vocus merged with M2 Communications and acquired Amcom. While the TPG/iiNet merger brought two similar companies together, and as such potentially reduced the number of players in the market, the Vocus/M2 merger brought two different companies together – one operating in the business market and one operating in the retail market.

There is also a significant number of Mobile Virtual Network Operators (MVNO) in Australia:

MVNO Amaysim recently launched NBN products, however in late 2018 Amaysim sold its fixed line broadband customer base to regional telecommunications operator Southern Phone. The transaction will enable the company to simplify its operating structure, defend and grow its core mobile and energy businesses, and invest in its technology platforms.

Mobile broadband usage continues to grow strongly, a trend which will continue in the wake of the marketing of a wide range of affordable and more capable devices, and of LTE population coverage which by 2018 had reached about 98%.

4.5G and 5G are the new frontiers linked to wearable device communications and other IoT and M2M activities. Telstra clearly has both the IoT and the M2M market in its sights – the many interconnectivity aspects involved in smart energy are especially high on the company’s list.

This report evaluates the strategies and performances of the mobile network operators, including financial and operational data. It also reviews the main MVNOs and presents an industry overview as well as data and analysis on the trends and key developments in these maturing markets.