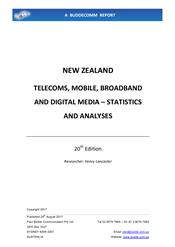 This report provides a comprehensive overview of trends and developments in New Zealand’s telecommunications market. The report analyses the mobile, internet, broadband, digital TV and converging media sectors. Subjects include:

The overall number of broadband subscribers in New Zealand has increased steadily in recent years, though at a slower pace in line with higher market penetration. The principal growth areas have been in the mobile broadband and fibre sectors. This trend will continue over the coming years as the Ultra-Fast Broadband (UFB) service sees greater uptake among consumers. By March 2017 almost three quarters of the build in UFB1 areas had been completed, with about a third of premises taking a service. The second phase of the UFB (UFB2) will extend coverage to 84% of the population by 2024. In conjunction with the UFB, the incumbent telco Spark is planning to replace its legacy PSTN network with an IP-based network by 2022.

New Zealand’s mobile market continues to undergo significant developments. There have been considerable gains made in LTE services, with effective competition between Spark, Vodafone NZ and the country’s third mobile operator 2degrees. Coverage from LTE networks has widened considerably in recent quarters, supported by the Rural Broadband Initiative rollout which is adding a large number of mobile cells to new or underserved areas. This has bolstered the uptake of mobile broadband. Network operators also provide among the fastest LTE data rates globally.

This report assesses the key statistical data and regulatory measures in New Zealand’s telecom market. It covers the fixed-line sector and the progress of the UFB network rollout. The report also covers the fixed and wireless broadband markets, noting the rapid take-up of fibre-based services among consumers. In addition the report analyses developments in the mobile voice and data segments.