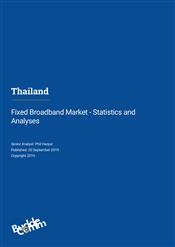 The expansion of broadband internet in Thailand in the early stages saw widespread adoption of Digital Subscriber Line (DSL) services, together with some significantly lesser deployment of the cable modem option, as well as some broadband wireless access. The transition to these other technology platforms had previously been inhibited by the Thai regulatory environment which saw ISPs unwilling to invest heavily in the necessary infrastructure.

The Thailand market has witnessed reasonably strong growth in the fixed broadband market over the past few years from a relatively small base. However fixed broadband penetration remains relatively compared to other developed Asian telco markets due to a limited number of fixed lines and the dominance of the mobile platform. Over the next five years to 2024 strong but gradually declining growth is predicted as the major providers continue to rollout their fibre networks.

Thailand's Ministry of Sciences & Technology, Ministry of Digital Economy & Society, and Huawei, has jointly developed a digital roadmap to achieve its “Thailand 4.0” vision. The Road Map has been developed from a realization that digital technologies can drive socio-economic development and economic growth of countries.

Thailand is quickly becoming one of the biggest e-commerce markets in Southeast Asia. By 2022, sales in the market are expected to reach around $6 billion.