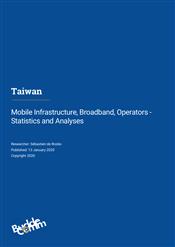 Taiwan possesses a competitive mobile market comprised of six mobile network operators, though the market is dominated by only three players. High mobile penetration has resulted in intense competition to gain new subscribers. As a result, the market was quick to embrace 4G services as operators developed networks and service to provide them with a competitive edge. Operators are also gearing up to deploy 5G in a range of bands later in 2020.

The mobile segment is relatively well developed compared to other Asian markets. It has experienced negative growth over the last five years due to an increasingly saturated market. Flat to very slow growth is predicted through to 2024. The market will be constrained from higher growth due to the high penetration rate and strong local competition.

As with any shift in the market landscape, Taiwan’s three smaller players saw the introduction of LTE as an opportunity to expand their market share, principally by offering more value to end users through higher speeds and/or lower prices.

Taiwan has seen a rapid increase in mobile broadband penetration over the past five years, driven by strong growth in the number of users on LTE. Further growth during the next five years will be stimulated by the introduction of services based on 5G, which will offer faster speeds and greater flexibility. This in turn should see the addition of subscribers who choose to abandon fixed-broadband for mobile-only solutions.