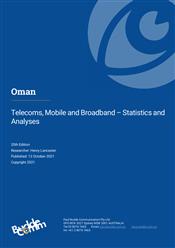 For many years Oman’s mobile market was a duopoly between the incumbent telco Omantel and its challenger Ooredoo Oman. In February 2021, Vodafone Group and Oman Future Telecommunications consortium secured a license to operate the Sultanate’s third network, with services being under the Vodafone Oman brand. The new operator has been able to extend its reach based on a tower leasing arrangement signed in 2020 with Oman Tower Company.

Oman has a modern mobile sector which comprises substantial coverage of both 3G and LTE networks. In February 2021 Omantel launched commercial 5G services, while Ooredoo Group has a five-year framework agreement with Ericsson to develop its 5G platform across the Group’s ten markets, including Oman. The Covid-19 pandemic has caused a spike in mobile data traffic, which prompted Omantel to upgrade a number of sites from 3G to LTE, as well as build a number of additional 5G sites.

While Oman’s fixed broadband infrastructure penetration is considered low, it is being improved with the building of fibre-based networks as part of Oman’s Vision 2040 program.

Oman has also established itself as an important communications hub in the Middle East, with access to numerous submarine cables including the 2Africa submarine cable, which should become available during 2023-2024. The 9,800km Oman Australia Cable running from Muscat to Perth, with the potential for a branch line to Djibouti, is making progress and is expected to be completed in December 2021. This additional infrastructure will provide considerable additional bandwidth.

BuddeComm notes that the outbreak of the pandemic continues to have a significant impact on production and supply chains globally. To various degrees, the telecom sector during the coming year is likely to experience a downturn in mobile device production, while it may also be difficult for network operators to manage workflows when maintaining and upgrading existing infrastructure. Overall progress towards 5G may be postponed or slowed down in some countries.