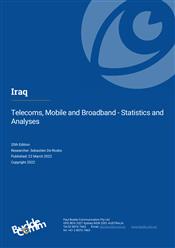 Iraq continues to face a number of political and economic challenges, though increasing civil stability has made it easier for mobile and fixed-line operators to rebuild telecom services and infrastructure damaged during the last few years. The government was minded to extend the licences held by the MNOs for an additional three years to compensate for the chaos and destruction caused between 2014 and 2017 when Islamic State held sway in many areas of the country. However, this plan was scuppered by opposition among some politicians, who asserted that the market needed more competition rather than extensions of existing licenses.

The three major MNOs are Zain Iraq, Asiacell, and Korek Telecom, which together control over 90% of the mobile market. The operators have struggled to develop LTE services, partly because of issues related to damaged infrastructure but also partly due to wrangles with the government and regulator concerning the conditions of their licences. With the availability of LTE services being very low, there is little change for 5G to be available in the short term. In the meantime, most services are still based on GSM and 3G, except in the Kurdish region where LTE is more widely available.