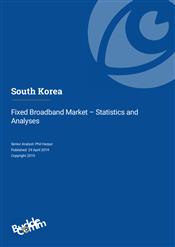 South Korea has the world’s highest number of broadband services per capita. Korea’s policy emphasis has been to establish an Ultra Broadband convergence Network (UBcN) with 1Gb/s speeds on fixed lines and 10Mb/s on wireless.

Fixed-line broadband market penetration has grown slowly over the past five years in a highly mature market. Over the next five years to 2023 growth is expected to continue to increase slowly.

The South Korean Ministry of Science and ICT (MSIT) announced the establishment of a new fund specifically targeting technologies and projects that can provide data rates of 10Gbps, with plans to reach 50% adoption rate of the super-fast speeds by 2022.

This report provides an overview of South Korea’s broadband market, government initiatives and technologies including cable modem, DSL, FttH, Apartment-LAN, and WiBro. IPTV statistics are included as well as broadband forecasts to 2023 and statistics on market share of the major broadband providers.

The Korean government has developed and demonstrated broadband-based services like e-health, e-learning, e-government and u-City. E-health services are provided to remote island regions of Korea. In this way, broadband has been used as a method to narrow the gap between rich and poor and among classes and regions.

This report also looks at various aspects of the digital economy in South Korea that support the drive to converged services. It includes information on e-commerce users, e-banking and e-government. It also contains information on internet usage patterns.