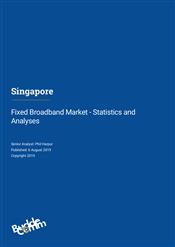 Singapore has earned the title of ‘the intelligent island’ after years of hard work, achieving high world rankings in most categories of technical advancement. The government’s vision for this began with its ‘Singapore One’ project, in what was the world’s first nationwide broadband network.

The government launched its Next Generation National Broadband Network (NGNBN) over a decade ago and the rollout is now essentially complete. It based on a combination of fibre-to-the-home (FTTH) and wireless networks. The NGNBN has continued to form the basis of the government’s strategy broadband strategy and implementation.

Singtel completed the migration of its cable to fibre-based networks for consumers in 2018. StarHub plan to shut off its cable services by 2019.

Slow growth in the fixed broadband market is predicted over the next five years in a mature and saturated market. Optical fibre broadband also has seen strong growth as customers migrate to the NGNBN’s fibre network. xDSL on the other hand has seen a decrease in usage and cable modem broadband also has been experiencing declining subscriber numbers.

Key Companies mentioned in this report: