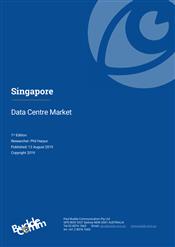 Singapore is one of the four major sub-markets for data centres in Asia alongside Hong Kong, Australian and Japan. The Asia-Pacific region is currently undergoing very strong data centre growth driven by large-scale international cloud providers including Amazon Web Service (AWS), Google, Microsoft and IBM as they expand aggressively in major hubs including Singapore.

Singapore has evolved to become one of the most mature data centres markets globally. It is seen as Asia’s leading market in terms of business operations for data centres, ahead of Hong Kong, South Korea and Japan. The market is highly competitive due to a large number of local and international colocation providers relative to the size of the country.

Data centre specialists, both local providers, such as Telin Singapore and DCSG and especially international providers such as Equinix and Digital Realty, have grown significantly over the past few years, as a number of telcos and IT service providers have fully or partially retreated from the data centre market.

Singapore has strong and diverse fibre connectivity, both domestically and internationally to major APAC markets and continues to expand its capacity.

As data centres become larger and more efficient, new data centres are generally being built in centralised areas, in order to achieve the required economies of scale. Singapore has developed to become a regional hub for large enterprises across a range of industries. The diversity and number of local and international cloud providers entering Singapore data centres has significantly increased over the last three to five years.

Nearly all the major hosting and cloud providers globally have built a presence in Singapore. In particular, hyperscale / international public cloud service providers and digital media content providers such as Amazon Web Services (AWS). Google, Facebook and Alibaba Cloud have been key in driving demand for data centre services, significantly increasing their uptake of data centre capacity in Asia and particularly in Singapore over the past few years, by building massive-scale platforms.

Multimedia content providers and cloud companies are driving strong demand for data centre storage and networking in Singapore. There are a growing number of young consumers who access high levels of data daily to watch movies, upload photos and videos, play games and make cashless payments. This is attracting data centre operators to bring data and cloud storage closer to the consumers.

High growth in data storage and management related to the digital economy will be a strong driver of growth over the next decade. In particular, digital media companies emerging from industries such as e-commerce, content, gaming and software applications, especially from large emerging markets such as China and India, are looking to expand outside their respective countries to Singapore. This is driving greater demand for leased data centre services in Singapore.