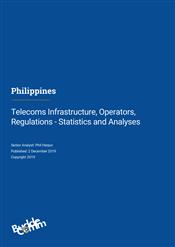 A substantial amount of capital continues to be invested in building telecommunications infrastructure throughout the Philippines.

Telecommunications investment in the Philippines will continue to see increasing emphasis on supporting high speed broadband access. The bulk of the fixed services are in urban areas. In contrast, the fixed line market in the Philippines remains underdeveloped and fixed line penetration continues to show stagnant growth. A major reason for this is due to the dominance of the mobile segment and the rapid expansion of the mobile broadband segment.

Despite competition from new carriers and mobile operators, PLDT has continued to be the Philippines’ dominant fixed-line provider. However, in recent years, Globe Telecom in particular has been pushing hard to overhaul the incumbent and now is the leading mobile provider in term of overall subscribers.

In 2018 the Department of Information and Communications Technology (DICT) published its guidelines to accommodate the entry of a third major telecoms operator in the local market.

Over the past five to ten years and particularly more recently over the past two years there has been significant new data centre builds and additions to existing capacity as new providers enter the South East Asian data centre market. More and more people are getting online and using cloud computing services, driving demand for data centres services.

The Philippines government passed a Bill which seeks to provide for an online network establishment (ONE) policy for the country to reduce the digital divide and accelerate the rollout of more wireless communications technology across the country.

In recent few years, the major operators have also been forced to cope with the pressures of slowing growth in traditional areas of the market and rising investment needs for new growth areas in such as consumer broadband – both fixed line and mobile. In particular, there has been good progress in the rollout of optical fibre infrastructure. PDLT announced plans to accelerate a network modernisation plan that will see it switching to fibre over the following two years.