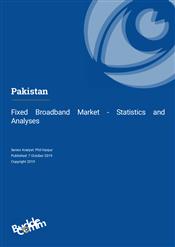 Despite the efforts of the government to stimulate growth in the internet segment of the telecommunications market, for a long period it has remained a fairly sluggish component of Pakistan’s overall telecoms sector. The data and internet service sector has been opened up for private operators to invest and operate services in the country.

Fixed broadband penetration in Pakistan remains very low mainly due to the dominance of the mobile platform. Also, the limited and declining number of fixed lines in Pakistan is restricting more widespread development of fixed broadband. Penetration increased from 0.4% in 2010 to 1.9% in 2014, but then dropped 1.0% in 2019. Over the next five years to 2024 low growth is expected from this small base.

The Universal Service Fund (USF) and Ufone signed a contract for a project of seamless broadband coverage on the Makran Coastal Highway. It is the first scheme under the Next Generation Broadband for Sustainable Development program with focus on broadband coverage in order to allow seamless operations.