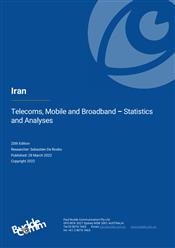 Iran’s telecom infrastructure has suffered from sanctions in recent years, which prevented the import of equipment and devices and encouraged widespread smuggling, with a consequent loss of tax revenue. To address this, the government introduced a device registration scheme, and bolstered the capacity for domestically manufactured mobile phones.

Operators have invested in broadening the reach of their LTE networks, which has increased network capacity and improved the quality of mobile broadband services. The country is also looking to 5G, with services having been launched by MCI and MTN Irancell in early 2021. The sector is still hamstrung by the paucity of spectrum, though the government is addressing this with plans to auction spectrum in the 3.5GHz band for 5G use.

From a broad perspective, Iran offers significant opportunities for growth in the telecoms sector. The country has one of the largest populations in the Middle East, and there is a high proportion of youthful, tech savvy users having considerable demand for both fixed and mobile telecom services.