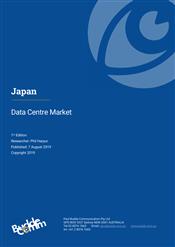 Japan has a strong presence as a regional Asian data centre provider and is a global financial and corporate hub and one of the fastest evolving digital markets in the world. Data centre locations have easy access to high-speed international connectivity, with landing points for several submarine cables that connect with the western United States. Japan’s digital economy is highly mature and difficult to serve from overseas or alternative locations.

Japan has now evolved into more of an international data centre market driven by the global hyperscale cloud providers expanding in the Tokyo and Osaka markets.

The Japanese data centre market has traditionally been very insular, dominated by domestic Systems Integrators / IT companies such as Fujitsu, Hitachi, Mitsubishi Electric and NEC, offering a one-stop shop for their IT services. However, this has recently changed significantly with international data centre firms such as Digital Realty, Equinix and Colt DCS have all deploying sizeable data centre footprints in both the Tokyo and Osaka markets.

As international businesses continue to enter the country, especially from China, this is driving higher data usage due to increased usage of data hungry applications and platforms such as: data analytics, big data and Artificial Intelligence type workloads, supported by high usage of digital media content and streaming platforms.

A range of global companies have all invested in data centre infrastructure in Japan either by building their own data centres or acquiring large wholesale space within global data centre specialist providers. These include: global multimedia and content providers, financial services firms and IT companies.

An increasing number of organisations in Japan are implementing comprehensive real-time visibility of their data centre operations, in order for them to optimize their existing infrastructure to benefit from cost savings by for example adjusting cooling in accordance to load capacity, track carbon emissions and resources.

Nearly all the major hosting and cloud providers globally have built a presence in Japan. In particular, hyperscale and international public cloud service providers and digital media content providers such as Google have been key in driving demand for data centre services, significantly increasing their uptake of data centre capacity in Asia over the past few years, by building massive-scale platforms.

Some overseas data centre providers such as Digital Realty, have successfully established a foothold, by teaming up with local Systems Integrators and IT companies rather than via acquisitions.

A growing number of data centre operators will choose to locate their data centres in the other Asian markets to enhance data speeds to end-user consumers in emerging densely populated cities, as local demand increases and cross-border data flow regulations improve.

Recent growth has been particularly strong in developing markets such as Malaysia, Indonesia, the Philippines, Thailand and Vietnam. Vietnam in particular has seen very strong growth since 2017, including the construction of SUPERNAP in Thailand. Compared to developed markets such as Japan which have a scarcity of available land at very high cost to purchased, land is much cheaper and more readily available in these developing markets.