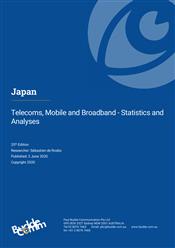 Japan’s telecommunications sector is one of the most developed markets in the world.

Fixed line growth in Japan has been stagnant over the past five years. This trend is predicted to continue over the next five years to 2024.

Japan has a strong presence as a regional Asian data centre provider and is a global financial and corporate hub and one of the fastest evolving digital markets in the world. Data centre locations have easy access to high-speed international connectivity, with landing points for several submarine cables that connect with the western United States. Japan’s digital economy is highly mature and difficult to serve from overseas or alternative locations. Japan has now evolved into more of an international data centre market driven by the global hyperscale cloud providers expanding in the Tokyo and Osaka markets.

Japan possesses a large and vibrant television industry due to its unique culture and market size. Legislation enacted to restrict ownership has led to a plethora of broadcasters. Japan’s vertically integrated broadcasting industry means broadcasters create as well as distribute content.

Japan possesses one of the most advanced and largest broadband markets in the world. Japan has also been an early adopter of triple-play models which provide TV, broadband internet and voice telephony as packaged services from a single provider. Fixed-line broadband market penetration has grown slowly over the past five years in a highly mature market.

Recognising the potential of applying ICT to improve both social and economic development, Japan has taken steps to develop a digital economy. Businesses, governments and private citizens have been instrumental in creating the online content and services that make up the digital economy.

Mobile subscriber growth is expected to be relatively low over the next five years to 2024 due to a highly mature and highly competitive market. The market will be driven by the uptake of both 4G LTE and 5G services.

Japan’s mobile market is dominated by three major operators – NTT DoCoMo, KDDI and Softbank Mobile. However, the Japanese government was looking to open its mobile market up to new players for 5G services. This could result the entry of new players, even those from outside the traditional telecoms space, and potential foreign players, including those looking to target the IoT, VR and automotive applications. Japan’s largest e-commerce company is working on plans to build its own nationwide 4G mobile network with an intended launch later in 2020.

Mobile broadband subscriber growth is expected to be relatively low over the next five years to 2024 due to a highly mature mobile subscriber market, with the vast majority of subscribers already having wireless broadband access.

The four carriers have all launched 5G services, with DoCoMo targeting nationwide coverage by 2023. The anticipated surge in interest for IoT and related technologies such as driverless cars is expected to help fuel a boom in spending.

The Ministry of Internal Affairs and Communications (MIC) is preparing to embark on R&D work in Japan to explore a new telecoms standard that will eventually succeed 5G technology.