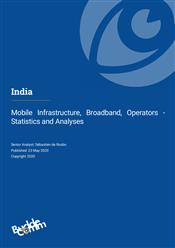 India’s mobile market dominates the local telecom sector, having a large subscriber base and revenue as well as huge capital investment by operators. It remains a highly competitive market though the number of players has fallen in recent years as a result of bankruptcies and merger activity. Four operators alone account for 9.6% of all subscribers.

The emergence of Reliance Jio in the market in 2016 was disruptive. The operator’s strategy was to provide free voice and data initially in a bid to win customers, and then encourage churn from competitors through cut-priced packages. This resulted in a sharp fall in ARPU for most operators, and a sharp loss of subscribers by some, including RCOM which saw its subscriber base nearly wiped out.

Slower market growth is predicted over the next few years, with growth in 2020 partly affected by the disruption caused by the COVID-19 pandemic. The market will also be constrained from higher growth as a result of local competition and the relatively high penetration.

Mobile broadband penetration has developed strongly over the past few years, driven by the greater number of mobile subscribers, the wider availability and LTE infrastructure and the greater adoption of data-based services.

Uptake of next generation technologies such as IoT, and evolving trends such as smart cities, and new devices offering virtual reality experiences will all enhance data usage going forward. Operators will increasingly focus on infrastructure investments such as optical fibre and small cells for expanding LTE coverage and capacity.

India has taken initial steps towards the rollout of 5G services and is developing a 5G corridor in New Delhi as part of technology trials. However, the government has postponed the auction of 5G suitable spectrum until 2021, and given the financial difficulties faced by operators having to pay high tax dues there will be little incentive to prioritise 5G until 2021 or 2022.