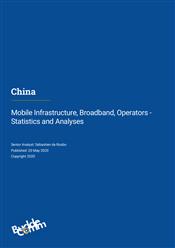 China’s mobile market is moving into a new stage characterised by low subscriber and profit growth. This is reflected in the slower growth in China’s overall subscriber base and falling margins as China’s three big operators resort to price competition to grow the number of subscribers or to respond to competitive threats.

By early 2020 the number of mobile subscribers had broached 1.58 billion. Growth in the number of subscribers is expected to be relatively slower in coming years due to a saturated and mature market. Market penetration is predicted to reach 134% by 2024.

China has emerged as one of the most aggressive countries promoting 5G and is predicted to be one of the top four of markets that will drive the growth of 5G in Asia and is projected to become the world’s largest 5G market by 2025.

The major Chinese internet companies will lead the way introducing advanced consumer services based on 4K and 8K videos, as well as augmented and virtual reality technologies, on the new 5G networks. Other drivers for 5G in China include smart city initiatives that make use of artificial intelligence for public safety, traffic management and disaster management.