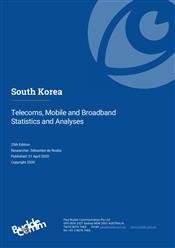 This report provides a comprehensive overview of trends and developments in South Korea's telecommunications market. The report analyses the mobile, internet, broadband, and converging media sectors. Subjects include:

South Korea has transformed its economy to one that is more progressively knowledge based. It has invested significantly in telecommunications infrastructure over past decades.

South Korea is ranked 2nd out of 34 with an Asian Telecoms Maturity Index score of 93. (BuddeComm’s “Asian Telecoms Maturity Index”, is an index (on a scale between 0 and 100) that measures and ranks the relative maturity of the telecoms industry in all of the 34 countries in Asia.) Compared to other Asian nations, South Korea has very high mobile and mobile broadband penetration and very high fixed broadband penetration.

Fixed lines in South Korea have been gradually declining over the past five years. This trend is predicted to continue over the next five years to 2023.

South Korea has one of the world’s most active telecommunications and Information Technology (IT) markets backed by strong support from the government. As well as the commitment of the government, the sector is boosted by an innovative private sector and a technologically savvy population. Spending on ICT and high-technology equipment helped lead a transformation of the economy. The government aims to transform the country into a knowledge-based information society in a ‘smart-age’.

Huawei has partnered with LG U+. for the launch of Seoul TechCity as part of its commitment to drive smart city efforts. The Seoul TechCity collaborative project aims to deliver smart city capabilities for the Korean capital.

South Korea has the world’s highest number of broadband services per capita. Korea’s policy emphasis has been to establish an Ultra Broadband convergence Network (UBcN) with 1Gb/s speeds on fixed lines and 10Mb/s on wireless.

Fixed-line broadband market penetration has grown slowly over the past five years in a highly mature market. Over the next five years to 2023 growth is expected to continue to increase slowly.

The South Korean Ministry of Science and ICT (MSIT) announced the establishment of a new fund specifically targeting technologies and projects that can provide data rates of 10Gbps, with plans to reach 50% adoption rate of the super-fast speeds by 2022.

Mobile subscriber growth has been moderate in mobile market over the past five years. The market has been driven by organic growth from the three main mobile operators, together with the multitude of niche MVNOs. Mobile subscriber growth is expected to be relatively low over the next five years to 2023. Growth rates will taper off further over the next few years as the market further matures in a highly competitive market. The market will be driven by the uptake of both 4G and 5G services.

KT Corp and LG Uplus launched commercial services to consumers. Initial coverage is reported to be heavily focused on Seoul and its surroundings.

The mobile broadband subscriber base in South Korea has grown moderately over the past five years in a relatively mature market supported by widespread rollouts of 4G infrastructure. Slower growth is predicted over the next five years to 2023.