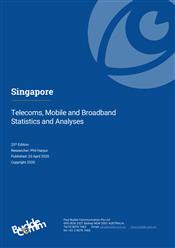 The Next Generation Broadband Network (NGNBN) roll out and deployment in Singapore has effectively been completed and there continues to be a rapid take-up of fibre-based services.

Singapore has been working to shape itself into what it says will be the world’s first ‘Smart Nation’ where data and analytics play a critical role in its society and economy.

Singapore’s smart nation projects now include smart sensor networks for water and air, smart logistics that enable interoperability standards throughout the supply chain, and smart sensors in the homes of the elderly or chronically ill.

Singapore has developed to become a regional data centre hub for large enterprises across a range of industries. The diversity and number of local and international cloud providers entering Singapore data centres has significantly increased over the last three to five years.

Singapore’s mobile market has displayed slow growth over the last few years due to a highly mature market. Singapore’s mobile market remains highly competitive and operators have moved to a customer satisfaction and retention phase by offering value-added services as the market has matured. However very slow growth is also predicted over the next five years to 2024, as there is little room for further growth in a highly saturated market.

SingTel’s recent financial performance was one its weakest for more than a decade. It highlights the challenges faced by Southeast Asia’s largest telecoms carrier as rival providers expand in a highly competitive industry.

The government launched its Next Generation National Broadband Network (NGNBN) over a decade ago and the rollout is now essentially complete. It’s based on a combination of fibre-to-the-home (FTTH) and wireless networks. The NGNBN has continued to form the basis of the government’s broadband strategy and implementation.

Singtel completed the migration of its cable to fibre-based networks for consumers in 2018. StarHub plan to shut off its cable services by 2019.

Slow growth in the fixed broadband market is predicted over the next five years in a mature and saturated market. Optical fibre broadband also has seen strong growth as customers migrate to the NGNBN’s fibre network. xDSL on the other hand has seen a decrease in usage and cable modem broadband also has been experiencing declining subscriber numbers.

This is likely to see increased pressure on SingTel, Starhub and M1, potentially triggering another price war which is likely to lower ARPUs over the next few years. Over the past few years price wars had broken out in the Singapore mobile data market indicating the heightened market competition that is now evident in a highly mature market.

Singapore saw strong growth in mobile broadband penetration for the past five years, however since then growth has been slow due to a mature and saturated mobile market. The mobile broadband market will be driven by increasingly faster speeds offered by the mobile operators as they roll out their 4G and 5G networks and improving tariffs due to strong competition.

The IMDA is backing the deployment of standalone 5G networks which will be capable of delivering a full suite of enterprise 5G capabilities, including network slicing and low latency connections for Internet of Things (IoT) applications.