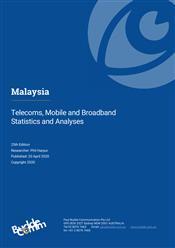 With its widespread application of modern technologies such as fibre optics, wireless transmission, digitalisation and satellite services, Malaysia has built one of the more advanced telecom networks in the developing world.

The country’s telecom sector, whilst still expanding and developing, has undergone a period of consolidation with its telecom companies operating in an ever increasingly competitive and changing market. Substantial government participation in ICT development has also been a particular characteristic of the Malaysian market. It has strongly backed the roll-out of a national broadband network.

The Malaysian data centre market has seen strong recent growth which is predicted to continue over the next five years, growth has been strong from both from local and international providers. Local Malaysian telcos are also beginning to consolidate their data centre footprint, by leasing data centre space in third party data centres, a trend more evident in developed markets such as Singapore.

Growth in the fixed broadband subscriber market has been flat over the past five years due to a stagnant number of fixed lines and the growing dominance of mobile broadband. Over the next five years to 2024 slow growth is expected to continue.

The Malaysian government aims to launch its ‘National Fibre Connectivity Plan’ in 2019. The plan will develop broadband infrastructure to ensure more efficient spectrum allocation to achieve the targeted 30Mbps speed in rural and remote areas within five years.

Malaysia’s mobile market is relatively developed compared to other Asian markets but has experienced a slight decline in market penetration over the last four years due to an increasingly saturated market.

With its widespread application of modern technologies such as fibre optics, wireless transmission, digitalisation and satellite services, Malaysia has built one of the more advanced telecom networks in the developing world. The country has a national objective to see Malaysia ranked as a developed country by the year 2020.

Progress has been reported on closing the urban/rural divide, with expanding mobile infrastructure in rural areas.

Malaysia has seen a rapid increase in mobile broadband penetration over the past seven years driven by strong growth of 4G mobile subscribers and high data caps. Strong but slowing growth is predicted over the next five years to 2024 as the market reaches a heightened state of maturity. The mobile broadband market will be driven by increasingly faster speeds offered by the mobile operators as they roll out their 4G and 5G networks and improve tariffs due to strong competition.

It is predicted that 5G will be used widely in Malaysia by 2022-2023. Mobile operators continue to carry out 5G trials as they work towards this date.