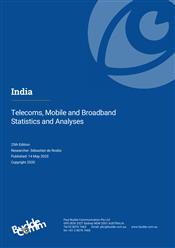 India has the potential to become one of the five largest data centre markets globally. In the last few years, there has been a radical shift in the way Indians produce and consume data. A number of government initiatives and regulations will see further increases in the number of internet users and enforce strict data residency laws that will require vastly more data centre capacity. There will be a rapid increase in the rate in which on-premise facilities are being outsourced to third-party data centres, especially as cloud computing continues to grow.

India's telecom industry is expected to see a major expansion of its network infrastructure during the 2019 to 2022 period. Each of the top three mobile operators: Reliance Jio, Airtel and Vodafone-Idea are now planning to extend coverage to address a surge in data consumption.

The fixed line market in India remains highly underdeveloped due to the dominance of the mobile segment. Further, the number of fixed telephone lines is slowly declining as the mobile segment continues to expand.

India’s fixed broadband market remains highly under-developed due to the dominance of the mobile platform and in turn by the uptake of mobile broadband. Fixed broadband penetration is expected to grow at a moderate rate over the next five years to 2024 from this very small base.

Newcomer Reliance Jio began offering its home broadband service, one of four engines of connectivity revenue for Jio, the other three being nationwide IoT, enterprise broadband and broadband for small and medium businesses.

The digital economy will help the country align to its goals of expanding the wider Indian economy as well as enhancing jobs. Sectors such as communications, including telecoms, IT services, eCommerce, FinTech and electronics manufacturing, are growing at a good pace, and in the coming years these sectors will expand further contributing to the country’s digital economic growth.

India’s mobile market dominates the local telecom sector with its large subscriber base and revenue numbers, as well as the huge capital investment by operators. It has continued to be a highly competitive market in which a large number of providers have been battling to increase market share.

India’s mobile market has experienced very strong growth over the last six years. The market remains highly competitive, but rather than a focus only on growth in subscribers the market is shifting to value-added. The roll-out of 4G / LTE services is driving significant shift to mobile data services across the country.

Particularly strong growth was seen as newcomer Reliance Jio aggressively entered the market, initially with a free data offering. This has seen a sharp drop in ARPU amongst most mobile operators and a sharp loss of subscribers by some operators. The subsequent price war in the mobile sector intensified further and has severely hampered RCOM’s business in particular, with its subscriber base nearly entirely wiped out.

Slower growth is predicted over the next five years to 2024. The market will be constrained from higher growth due to very strong local competition and an increasingly saturated mobile market.

India has taken initial steps towards the eventual rollout of 5G services. and has announced plans to establish a 5G corridor in New Delhi as part of its testing of the technology.