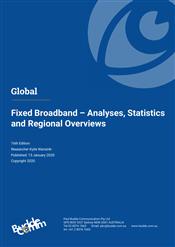 It provides insights and analyses into each market, supported by recent fixed broadband subscriber and penetration statistics. The report includes information on South Korea, which has the world’s highest number of broadband services per capita and the United Kingdom, the largest fixed broadband market in Europe.

It is well recognized that fixed broadband plays an important part in future societal developments and underpins the enormous transition to Smart Cities. It is also becoming clearer that fibre-based infrastructure will have an important role to play as the backbone for 5G infrastructure.

From a global perspective, the various regions and countries around the world can vary markedly in terms of fixed broadband development. Overall, Asia continues to be a leading player, not only in the roll-out of broadband infrastructure, but also in promoting and applying the increased use of broadband to facilitate the digital economy.

Asia also continues to be the dominant player globally in the Fibre-to-the-Home (FTTH) broadband market, with countries such as South Korea considered world leaders in this market segment.

In contrast, the development of the fixed-line broadband market in Africa has long been stymied by the lack of fixed-line infrastructure in rural and semi-rural regions, as well as by the poor quality of networks in those urban areas where they are concentrated. As a result, mobile networks provide the principal platform for voice and data connectivity.

In general terms, Latin American countries have moderate fixed-line broadband penetration rates, being generally lower than in Europe but above those found in Africa and parts of Asia.

In Europe, the leading fixed broadband markets, such as France and the United Kingdom, generally started to migrate from copper to fibre networks earlier, and thus have a more advanced fibre infrastructure in place.

The North American market sees the USA investing significantly in fibre deployments and Canada has benefitted from government policies which have encouraged the extension of broadband to rural and regional areas, with the result that services are almost universally available.