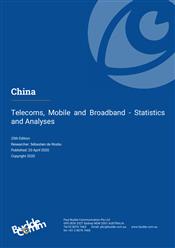 This report provides a comprehensive overview of trends and developments in China’s telecommunications market. The report analyses the mobile, internet, broadband and converging media sectors. Subjects include:

The Chinese telecom market is the largest in the world in terms of subscribers. China's telecommunications development has generally been driven by investments from government-allied entities and features a strong industrial policy.

As the market approaches saturation, there has been a shift of emphasis in China's broadband policy from infrastructure build-up and service provision to application creation and user demand stimulation.

The Chinese telecommunications market is undergoing a rapid transition, and this is driving a fast-developing data centre market. The Chinese data market has been driven by multinational enterprises and international service providers seeking to establish a presence there. However, the country remains largely untapped by private operators and external hyper-scale providers such as Google and AWS.

China’s fixed-line market is in decline due to voice to mobile substitution. Fixed line penetration has dropped significantly over the past five years from 18% in 2014 to 12% in 2019. This trend is predicted to continue over the next five years to 2024 driven by the growing adoption of mobile broadband.

China’s government is aiming for universal and affordable broadband coverage through investment and competition as specified in policies: Private investment in state-controlled industries, Broadband China, and Internet Plus.

Unlike the US market, where cable internet access plays a prominent role in developing the fixed broadband market, DSL was the initial driving force behind fixed broadband growth in China, followed later by EPON fibre and now GPON fibre.

Fixed broadband penetration in China has grown strongly over the past five years. Fibre broadband continues to be the fastest growing broadband segment, as DSL and cable modem access will continue to decline as customers migrate away from these platforms in favour of fibre broadband. Moderate growth is predicted over the next five years to 2024.

China’s mobile market is moving into a new stage characterised by low subscriber and profit growth. This is reflected in the slower growth in China’s overall subscriber base and falling margins as China’s three big operators resort to price competition to grow the number of subscribers or to respond to competitive threats.

By 2019, the number of mobile subscribers had reached over 1.5 billion However, growth is expected to be relatively slower due to a saturated and mature market over the next five years to 2024.

China has emerged as one of the most aggressive countries promoting 5G and is predicted to be one of the top four of markets that will drive the growth of 5G in Asia, and is projected to become the world’s largest 5G market by 2025.