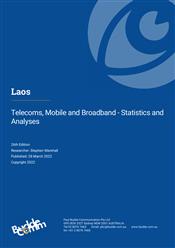 Laos joined the World Trade Organisation (WTO) in 2013. One of the conditions of admittance was to establish an independent regulator for its telecom sector within two years. The government had committed to do so by February 2015 as part of the accession agreement. Seven years later, however, and there still has been no sign of any firm plans being made to create an independent regulatory body. The Ministry of Posts and Telecommunications (MPT) retains the primary role in regulating the country’s telecom market. With the government also having a financial stake (in part or in whole) in every one of the major fixed-line and mobile operators, the MPT’s position and decision-making is far from what could be considered independent.

The major problem created by this situation is that the telecom market – particularly the mobile segment, where at least some degree of competition is allowed to exist – has largely been stifled. The regulatory regime appears at times to be openly hostile to free market competition, and has cranked down on past attempts to increase the value of services through more competitive pricing offers. This, in turn, has led to an environment that offers few incentives for providers to invest in new infrastructure or improve service quality; sufficient returns on investment cannot be guaranteed with such strict pricing controls as well as the potential for political interference.

Fixed-line and mobile penetration levels have, as a result, remained much lower than what’s seen in neighbouring South East Asian markets. Nevertheless, there are signs of growth in the mobile broadband segment as LTE network coverage slowly widens and, more recently, the country’s first 5G services start to come onstream. Residents in the capital will at least be able to enjoy high-speed services in the near future, while the rest of the country waits patiently to catch up with the rest of the world.

This report includes regulator and ITU market data updates to December 2019, Telecom Maturity Index charts and analyses, assessment of the global impact of Covid-19 on the telecoms sector, and other recent market developments.