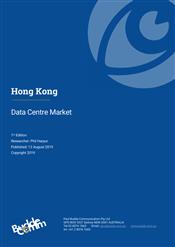 As data centres become larger and more efficient, new data centres are generally being built in centralised areas, in order to achieve the required economies of scale. Hong Kong has developed to become regional hub for large enterprises across a range of industries. Most large international providers are focusing on Hong Kong in order to build a geo-redundant hyper multi-cloud architecture.

Hong Kong is one of the few locations in Asia that has a reliable and stable supply of electricity, advanced telecoms infrastructure with good fibre connectivity and is sheltered from natural disasters.

Hong Kong is a major financial and international trading and logistics hub and is home to many regional offices and headquarters of global corporations. This generates strong demand for secure data centre facilities and services. Its proximity to the Mainland of China is also a core strength.

Nearly all the major hosting and cloud providers globally have built a presence in Hong Kong. In particular, hyperscale and international public cloud service providers and digital media content providers such as Amazon Web Services (AWS). Google, Facebook and Alibaba Cloud have been key in driving demand for data centre services, significantly increasing their uptake of data centre capacity in Asia and particularly in Hong Kong over the past few years, by building massive-scale platforms.

Cloud operators have overtaken financial service clients to be the largest occupiers of data centres. In turn, multimedia content providers and cloud companies are driving strong demand for data centre storage and networking in Hong Kong.

Over the next five to ten years the Hong Kong data centre market will face mounting challenges with a lot of new local supply entering the market, and a growing secondary market in neighbouring countries, where some potential new business will go to surrounding, cheaper markets such as Indonesia and Malaysia which are very quickly developing their data centre markets.