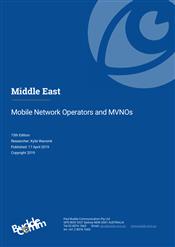 The Middle East mobile market offers opportunities for growth due to its large populations and increasingly progressive outlook. However, there are vast differences between the various countries. Some markets have significant mobile penetration and are looking towards mobile broadband for growth – while other markets face more challenging issues with infrastructure destruction and civil tension inhibiting current growth. This report provides comprehensive insights and statistics into the mobile markets of the Middle East and includes the countries of Bahrain, Iran, Iraq, Israel, Jordan, Kuwait, Lebanon, Oman, Qatar, Saudi Arabia, Syria, Turkey, United Arab Emirates and Yemen.

Growth opportunities exist for mobile operators in the Middle East

The Middle East is earmarked as a region which will experience comparatively high mobile subscription growth in some of its markets over the next few years - compared to many of the more developed and saturated markets around the world. This is expected to be led by the largely populated countries of Turkey, Iran and Iraq which still have room for mobile subscription growth to occur.

5G is also firmly on the agenda for many markets in the Middle East, particularly in the GCC countries. Operators are busy deploying 5G technologies in anticipation of 5G and the introduction of devices, spectrum allocation and regulatory approval will eventually push these developments along faster.

The Middle East is benefitting from a number of pan-regional operators such as Etisalat, Vodafone and Orange which are bringing valuable expertise to the region and compliment the local efforts of strong domestic players such as Batelco, Umniah, Turkcell and VIVA, just to name a few. 4G LTE is already heavily deployed in many markets and the operators are turning to increasing mobile broadband usage in order to grow revenues.

In some Middle Eastern markets however; there are unique challenges relating to civil unrest which has hindered mobile progress. The operators in countries like Yemen and Syria, for example, face more challenging issues relating to infrastructure destruction, security concerns, economic pressure and humanitarian crises.

This annual publication also incorporates BuddeComm’s ‘Middle East Telecoms Maturity Index’ (TMI). This is an index (on a scale between 0% and 100%) which measures and ranks the relative maturity of the telecoms industries in 12 countries in the region (Syria and Yemen have been excluded from the index at this time).

The Index has been devised as a tool to compare the different markets easily and uniformly. Countries have been placed into Market Leaders, Market Challengers or Market Emergents categories according to their Market Index score. Countries are compared according to a number of parameters with a focus on fixed broadband and mobile broadband penetration. GDP is also included in a number of charts both for illustrative purposes and as a gauge to help decipher market maturity. However, a number of countries low on the Index scale are noted for the considerable effort still required in terms of market investment, regulatory oversight and effective government-sponsored direction. Given the poor condition of the telecoms market in these countries they have not been placed into either category.