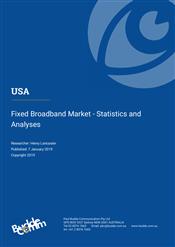 The US broadband market is seeing significant investment activity in fibre deployments, HFC upgrades with DOCSIS3.1 technology, and to a lesser extent G.fast. In addition, the market players are in the forefront with developing technologies and services based on 5G, which will facilitate the ability of customers to access their bundled services.

For some years much of the investment in fibre was undertaken by a number of smaller players and municipalities rather than the two key telcos, AT&T and Verizon, which had concentrated on a hybrid fibre/copper network. However, since 2017 these two operators have been fully focussed on FttP, shifting their investment efforts from a hybrid fibre-copper architecture. AT&T alone aims to cover almost 13 million premises with FttP by mid-2019. Verizon had a patchy experience with its FttN rollouts and so has chosen to switch deployment to FttP.

Although Google Fiber, as one of the key proponents of gigabit services, began scaling back its efforts at the end of the year it still promotes services in a number of markets. Altice USA is among those traditional cable broadband providers which have switched investments to fibre, believing that services based on GPON technology can be rendered more cost effective by using aerial rather than underground cabling.

There is growing recognition of the importance of a trans-sectoral approach to broadband networks, including the health, education and energy sectors, in order to fully realise the benefits of the nascent digital economy. The FCC’s Eight Fixed Broadband report, published in December 2018, revealed how much still needs to be done to move the US broadband market forward.

This report reviews several aspects of the cable, DSL, FttP, Wi-Fi and WiMAX broadband markets in the US. It provides market analyses as well as a range of relevant statistics in general and on the key operators.