USA - Fibre to the Premises (FttP) Market - Statistics and Analyses 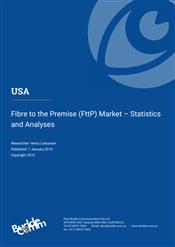 Given the size of the US market, and the growing demand for data on both fixed and mobile networks, there is continuous pressure for operators to invest in fibre networks, and to push connectivity closer to consumers. In recent years the US has seen increased activity from regional players as well as the major telcos and cablecos. Much of this activity was stimulated by Google Fiber following its investments in a number of markets. Although Google Fiber (now managed through Alphabet’s Access unit) began scaling back its efforts in late 2016, the company’s legacy has been profound. It encouraged the major providers to reduce pricing for their similar offers, stimulated interest among municipal leaders, and highlighted the fact that haphazard and potentially duplicated fibre deployments are no effective substitute for municipally-led wholesale fibre infrastructure accessable to any provider.

Local networks supported by municipal governments have also sprung up despite the lobbying efforts of AT&T and Verizon aimed at preventing local competition. However, for their part AT&T and Verizon have both refocussed efforts on FttP rather than FttN, looking at the benefits of current investments for decades to come. G.fast is also being rolled out, to a lesser degree, in areas where FttP is less feasible, while a growing number of cablecos have also deployed DOCSIS3.1.

This report provides an overview of FttP and other fibre network developments, including details of the major fibre deployments and key market statistics.

USA - Fibre to the Premises (FttP) Market - Statistics and Analyses