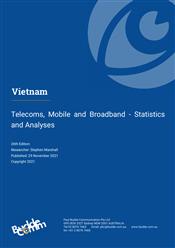 As a communist state and a centrally planned economy Vietnam has undergone significant structural changes over the years. The government has progressively introduced a degree of competition into the economy, and in this regard it plans to part privatise the state’s holdings in telcos as well as a large number of other enterprises.

Fixed broadband penetration in Vietnam remains relatively low, mainly due to the limited number of fixed lines and the dominance of the mobile platform. Internet speeds are also relatively low, and although there is good connectivity via submarine cables the frequent cable breaks have given the country a reputation for unreliable connectivity.

Fixed broadband access is dominated by DSL though in recent years the government has focussed on fibre, and growth in the sector is largely based on expanding fibre infrastructure.

Growth in Vietnam’s mobile market over the past five years has been moderate, in part due to the high penetration. Subscriber growth is expected to remain e relatively low over the next few years, though it will be stimulated by the development of 5G services among operators, and by the government’s efforts to make smartphone ownership universal. The country is well on the path towards commercialising 5G services, with test licenses having been issued in early 2019 and services anticipated by the end of 2020. The government’s plans for 5G include repurposing GSM spectrum from 2022 and granting licenses for spectrum in the 2.6GHz range to increase network quality.