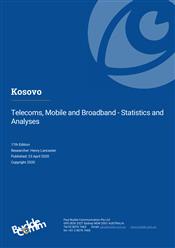 Kosovo has benefited from financial and regulatory assistance as part of the EU pre-accession process. The EU remains Kosovo’s main trading partner and its main source of foreign direct investment. The economy is significantly driven by trade with Germany and Switzerland, where most expatriates live and work. Remittances from such workers form an important part of household incomes.

The telecom sector has been liberalised, and legislation has aligned the sector with the EU’s revised regulatory framework. Measures have also been adopted relating to competition and to facilitating the market entry of new players. Nevertheless, poor telecom infrastructure has meant that fixed-line penetration remains low by European standards. Unlike most markets, the fixed-line broadband sector is dominated by new players, in particular the cable operator IPKO, a subsidiary of Telekom Slovenia.

Broadband penetration in Kosovo is developing slowly. There is effective competition between the main cable and DSL operators, though as yet there is little progress with the expansion of fibre networks: investment by the incumbent PTK, trading as Telecom Kosovo, in building an upgraded fibre-based NGN has been insufficient thus far, exacerbated by the company’s financial difficulties. These difficulties encouraged the government in mid-2019 to prepare the sale of a majority stake in the company.

The mobile sector accounts for most telecom lines for voice services, as well as the greater part of telecom revenue. Two MNOs dominate the sector. Telenor Serbia and VIP Mobile stopped offering unlicensed mobile voice and data services in mid-2017 across border regions as part of a deal by which Kosovo secured its own dialling code.