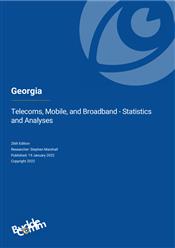 Georgia’s telecom sector has been attempting for many years to overcome the decades of under-investment in its fixed-line infrastructure during the Soviet era. Concerted efforts to privatise state-owned enterprises and open up the telecom market have been mostly successful, with a large number of operators now competing in both the fixed-line and the mobile segments. More needs to be done, however, to give investors the confidence to enter a market that has barely moved in terms of revenue growth over the last decade, and where regulatory overreach has sometimes come perilously close to arresting further development.

Georgia’s government moved fast following the collapse of the Soviet Union to liberalise the country’s telecom market. This resulted in a relatively high number of operators competing in the under-developed fixed-line segment as well as in the emerging mobile market. For all that, both segments remain dominated by just a few companies, with SilkNet and MagtiCom holding the lion’s share.

The mobile and mobile broadband segments have both demonstrated solid growth in 2021, to date. This upturn follows a significant contraction in subscriber numbers as well as revenue during 2020 due to the Covid-19 crisis. The pullback was roughly in line with Georgia’s drop in GDP for that year.

The pandemic also put a restraint on telecom sector investment in 2020, down 25% overall on the previous year. Funding has, however, continued to flow into mobile ventures, with the MNOs ploughing ahead with their preparations for 5G. That’s despite there yet being little apparent appetite or demand for higher-speed services; relatively low mobile data consumption levels on existing 4G LTE networks means the business case for rolling out 5G services is difficult to make.

This report update includes the regulator’s annual report for 2019, market statistics to March 2020, assessment of the global impact of COVID-19 on the telecoms sector, recent market developments.