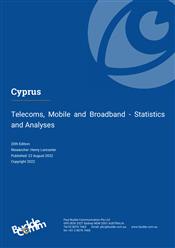 Cyprus has suffered from the effects of the pandemic, which essentially closed down the tourism sector during 2020 and into 2021. Nevertheless, the incumbent telco Cyta reported strong revenue growth in 2020, largely due to greater use of broadband and mobile services, though investment fell as a result of pandemic-related delays in completing planned projects.

The mobile market is served by four mobile network operators, including Cablenet which initially offered services as an MVNO before becoming an MNO in its own right. Cyta has offered mobile services under the Cytamobile-Vodafone brand since 2004 following a partner agreement with Vodafone Group, while Epic was acquired by Monaco Telecom in mid-2018. In mid-2021 Monaco agreed to sell its entire passive infrastructure in Cyprus. The number of mobile subscribers fell in 2020, largely the result of subscribers scaling back on multiple SIM cards as an economic measure.

The broadband market continues to develop steadily, providing the country with one of the highest broadband penetration rates in the region. DSL remains the dominant access platform, accounting for about two-thirds of fixed broadband connections. Cablenet is engaged in investment projects which will see its network pass about 80% of premises, compared to 50% as of early 2021. Although fibre infrastructure in Cyprus is minimal, in common with other markets in the region there are efforts underway (supported by the government and regulator) to extend an FttP service to about 200,000 premises. As a result, the number of DSL subscribers is set to fall steadily in coming years as customers are migrated to the fibre platform.

BuddeComm notes that the outbreak of the Coronavirus is having a significant impact on production and supply chains globally. During the coming year the telecoms sector to various degrees is likely to experience a downturn in mobile device production, while it may also be difficult for network operators to manage workflows when maintaining and upgrading existing infrastructure.