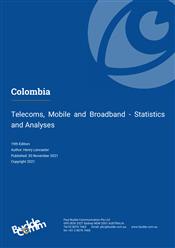 Despite the harsh impact of the Covid-19 pandemic on the country’s population and economy, Colombia’s telecom sector had a solid year thanks to positive performances in the fixed-line broadband, mobile broadband, and mobile voice and data markets.

Colombia’s fixed-line penetration remained stable by the end of 2020, though began to increase into 2021 as a result of the particular demands on households resulting from government measures associated with addressing the pandemic. However, at less than 15% it is well below the Latin American average. The mobile market, by contrast, reached a penetration rate of 136% (an increase of over three percentage points on 2019) and managed to keep the same upward growth trajectory that it has sustained over the last ten years. The fixed-line broadband market also expanded, with the number of subscribers increasing 11.4%, and with revenue increasing 9.9% thanks to increased data usage as many customers were forced to work or study from home during the year.

The mobile broadband market was the standout performer in 2020, with a 13% increase in the number of subscribers year-on-year, albeit the penetration rate is relatively low compared to other Latin American countries. Most significant of all was the surge in mobile broadband traffic — a 51% increase over the previous year — which was again a reflection of the strict lockdowns that Colombians had to endure for much of 2020.

Market leader Claro continued to expand its dominance of the mobile broadband market, increasing its share over the last decade by 10% to reach 54% at the start of 2021. Tigo, conversely, has seen its share halved over the same period of time, yet its subscriber base has still managed to grow on the back of a strong overall market. Tigo also suffered the most from Colombia’s imposed lockdowns in 2020, severely impacting its retail sales (a 20% decline in revenue) with nearly half of its stores being forced to close.