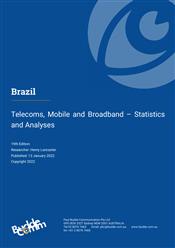 Brazil has one of the largest mobile markets in Latin America due to the sheer size of its population. Healthy competition in the mobile market has helped reduce the price of mobile services in Brazil in recent years and mobile service providers have had much success in converting their customers from prepaid to contract plans. Mobile broadband take-up has been rapid, with around 250 million subscriptions as of October arch 2021, bringing the penetration rate to 117%.

The principal telcos include Telefónica Brasil, operating fixed-line and mobile services under the Vivo brand, as well as América Móvil operating services under the Claro brand. Oi also offers a range of services though the company’s financial difficulties recently forced the company to sell its mobile, tower and data centre units in a bid to reduce debt.

The multi-spectrum auction, intended to push the development of 5G, was scheduled for March 2020 but was delayed due to interference issues with satellite TV broadcasts and the pandemic. The auction was completed in November 2021, and spectrum was assigned in the following month. The licensees are obliged to provide 5G services to all capital cities by July 2022, as well as about 35,500km of the national highway network.

The country also has one of the largest fixed line broadband markets in Latin America, though broadband penetration is only slightly above the regional average, trailing behind Chile, Argentina, and Uruguay. Amendments to the licensing regime adopted in October 2019 also require that ISPs which have switched to authorisations invest money saved from lighter regulations in the expansion of broadband services.

The fixed line broadband market has seen rapid growth for a number of years, with a growing focus on fibre broadband. In 2019 the number of fibre accesses overtook DSL connections. Vivo has the largest share of the fibre market, followed by Oi and Claro.

The country is a key landing point for a number of important submarine cables connecting to the US, Central and South America, the Caribbean, Europe, and Africa. Several new cable systems are due to come into service through to 2022, which will increase bandwidth and push down broadband prices for end-users. Investments have also been made into terrestrial fibre cables between Brazil, Argentina, and Chile.

This report provides a review of Brazil’s telecom market, including infrastructure and the regulatory environment. It profiles the main fixed-line operators and provides relevant statistics and analyses. The report also covers the mobile voice and data segments, providing a range of statistics and analyses, as also subscriber forecasts. In addition, the report reviews the fixed and fixed-wireless broadband sectors, including an assessment of technologies and regulatory influences.